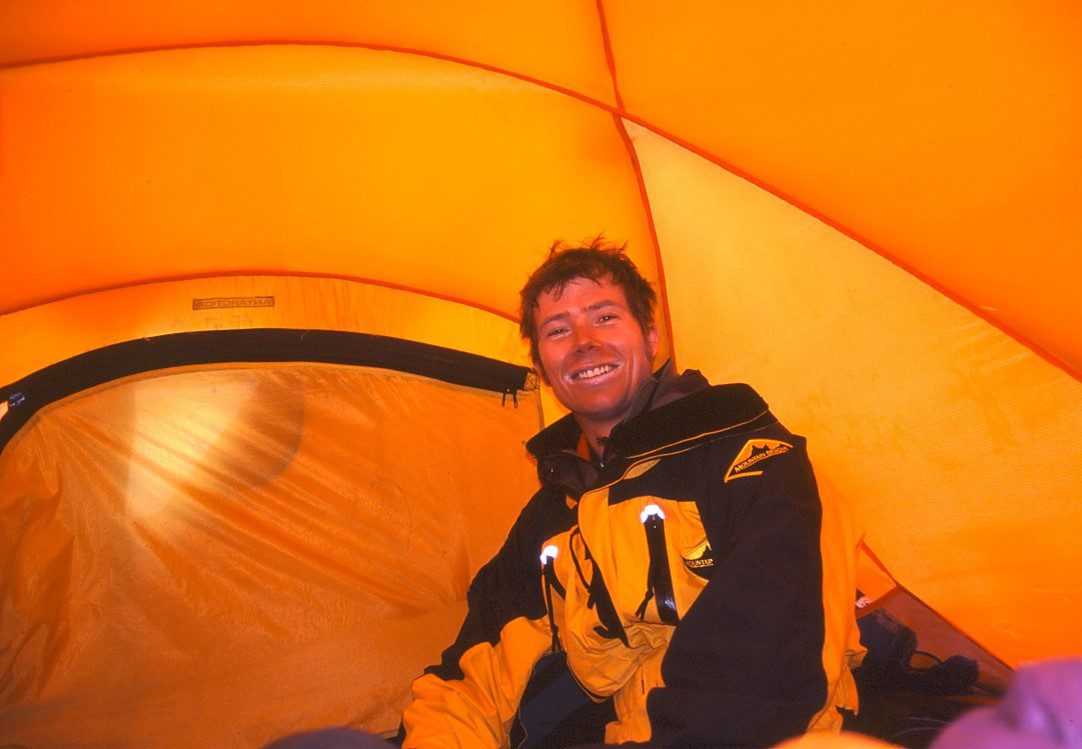 Posted at 10:23h in News, Off The Beaten Track by Alex Robinson 0 Comments
0 Likes
Share

I had arrived at the Yellow Band, a formidable and geologically distinguished cliff of yellow rock and ice, just as the pink hue of dawn transformed our lofty perch into a panoramic veil of jagged peaks and luminescent ice falls.  On a small icy platform, I proceeded to sit down, lift my oxygen mask and without consciousness or remorse, unashamedly vomited all down my down suit.  After the convulsions subsided, I was curiously fascinated by the acidic juices crystalising before my eyes into symmetrical ice flakes that just brushed off with one sweep of my hand.

“Are you OK?” yelled Russell Bryce across the base of the cliff.  At 24,000 feet, I was not going to miss the chance for a shot at the summit.  If I could climb up this cliff and onto the summit ridge, the technically challenging obstacles would be behind me, and it would be just a grind to the top.  I gave Russell the thumbs up!  I didn’t have the energy to speak. 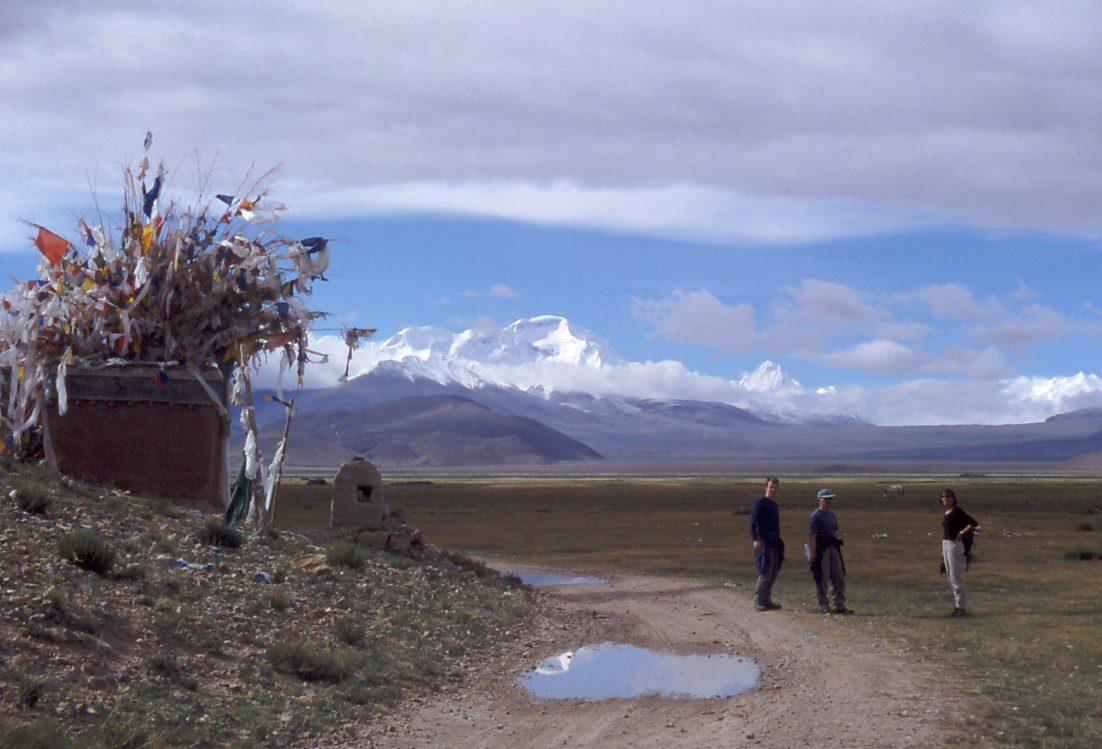 View from Tingri – Tibet, the last bastion of civilisation before approaching Cho Oyu, seen in the background

I never considered myself a mountaineer.  Every time I found myself in a remote mountain range sluggishly shimming up a ridge line, I would be in awe of the hardened climbers around me taking defined routes that touted reckless acclamations of marginality in terms of true risk assessment.

It has been noted that when climbing all of life’s superficialities evaporate.  Outwardly, the climb itself can be vividly explained with the artistic stroke of heroic authority and photographic romantism.  Internally it becomes an emotional entanglement tilted on a razor’s edge between genius and madness, and it’s an extremely thin wedge to play on.  I would say on most part more skewed to madness than genius.  But the mountains hold an addictive enticing power.  The power of revelation in truly recognising nature’s absolute beauty when all our modern commercial filters are stripped back to our primordial senses, the power of humility bestowed upon us gifted by the ability of mother nature’s capacity to send you recklessly back to your maker, and the struggle with the struggle is in itself intoxicating as a journey of self-discovery. 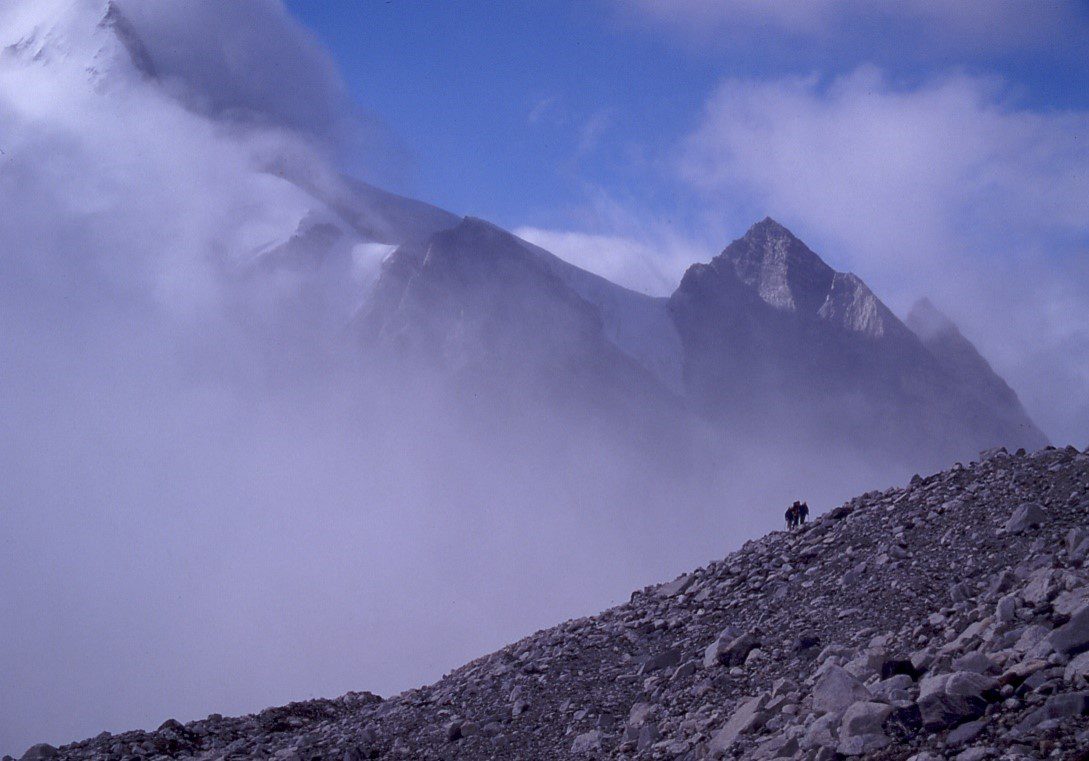 Trekking into base camp

20 years ago (almost to the day), two truck loads of food, fuel, shelter, communication systems, climbing hardware and personal belongings were loaded onto 47 yaks, and our pilgrimage to Cho Oyu’s advanced base camp begun.  The head Sherpa’s (Chhuldim Temba Sherpa, Loppasang Temba Sherpa and Karsang Namsel Sherpa) were our mountain demigods, closely followed by Lachhu our head chef who I always kept in close sight.  The team consisted of 6 other climbers (Australian, UK and a Canadian) and Marco Siffredi – a French snowboarder taking on the Hornbein Couloir on Everest’s notorious north face.   I first met Marco several years beforehand in 1997, at the Chamonix campground whose antics and achievements caught my attention back then. 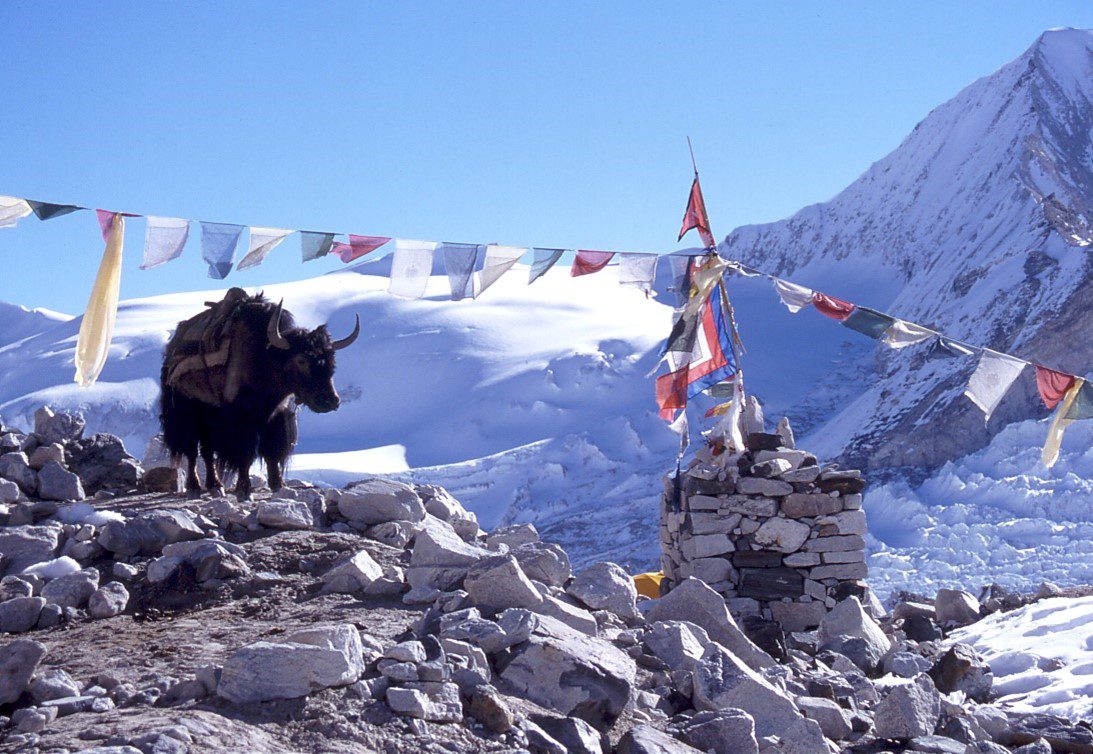 Yak at Base Camp

Cho Oyu stands at 8,201m on the Tibetan side of the Nepalese border.  It lays guarded by Everest 30km away and is infamous for being the 6th largest mountain the world.  Its obscurity by mountaineering standards exemplified the purity sought in an environment of profound isolation.  Hiking to Cho Oyu’s advanced base camp (ABC) at 5,650m found us nestled atop of a maroon strewn glacier fed by the hanging icefields preciously perched on the flanks of the lofty peaks that surrounded us.  This was to be our home for the next few weeks as we worked our way up the mountain.  The yaks were stripped of their burden, tents erected, and our new social base camp community was born.

Late on the 8th September 2001, we received a distressed radio call in our mess tent that Marco had disappeared from the summit of Everest in his record breaking attempt of snowboarding down the Couloir.   Our Sherpa’s quickly left our team in response to search for Marco.  Phurba Sherpa, who was on Everest’s north Ridge at the time assisting Marco swore they saw a lone figure 1,000 feet below them before slowly snowboarding away.  When they reached the site there was no tracks or evidence of anyone being present.  There was no one else on the mountain with them.  The Sherpa people, being very superstitious, believe it was an enigma of Marco saying his goodbye’s.  Marco was only 22. 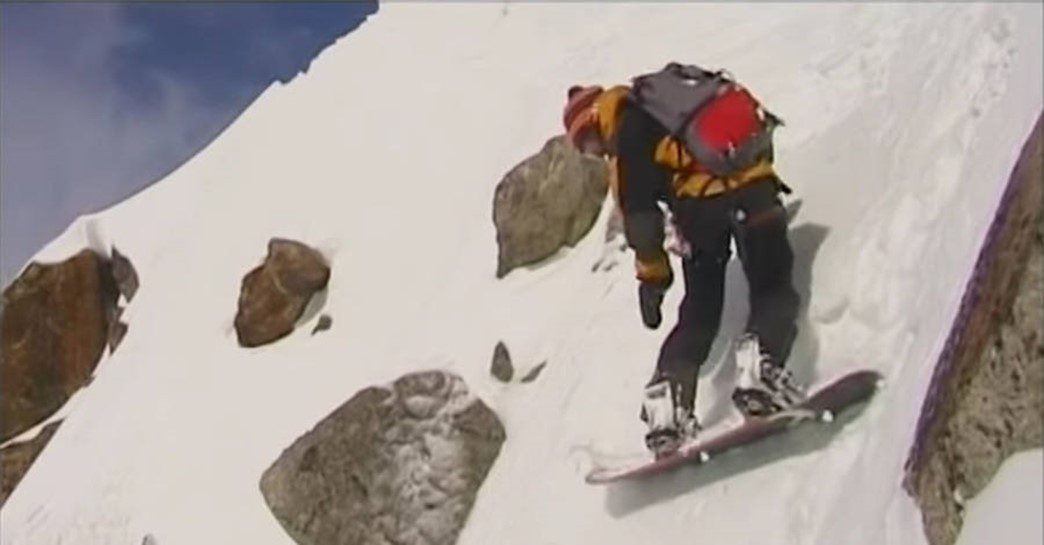 Marco Siffredi on his last descent

The route to Camp one commenced on glaciated moraine which circumvented the most spectacular ice seracs and 40-foot penitente’s that taunted the imagery of planetary jaws, but geologically nothing more than the residual of a dying glacier.  Then 350 vertical meters of loose scree rounded out on an ice laden knife edge ridgeline at 6,350m.  Our tents were wedged into the lee side with precision to avoid the crevasse that ran down the middle. 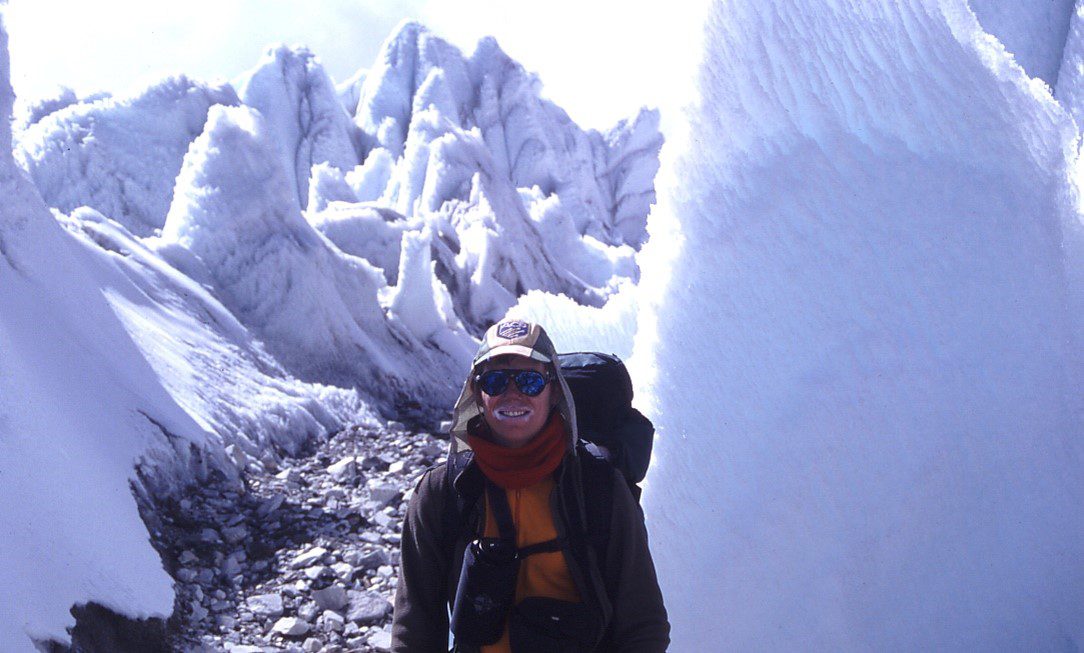 Logistically climbing the mountain entailed double carries.  The first climb to a higher camp necessitates carrying essential gear to stash that is required for further advancement on the mountain and then dropping back down to the lower camp.  The second climb to this camp will be to carry the remaining gear required, staying overnight then pushing up to the next camp to drop the next load up higher on the mountain.  And so on.  In essence, except for summit day, you essentially climb the mountain twice at a minimum. 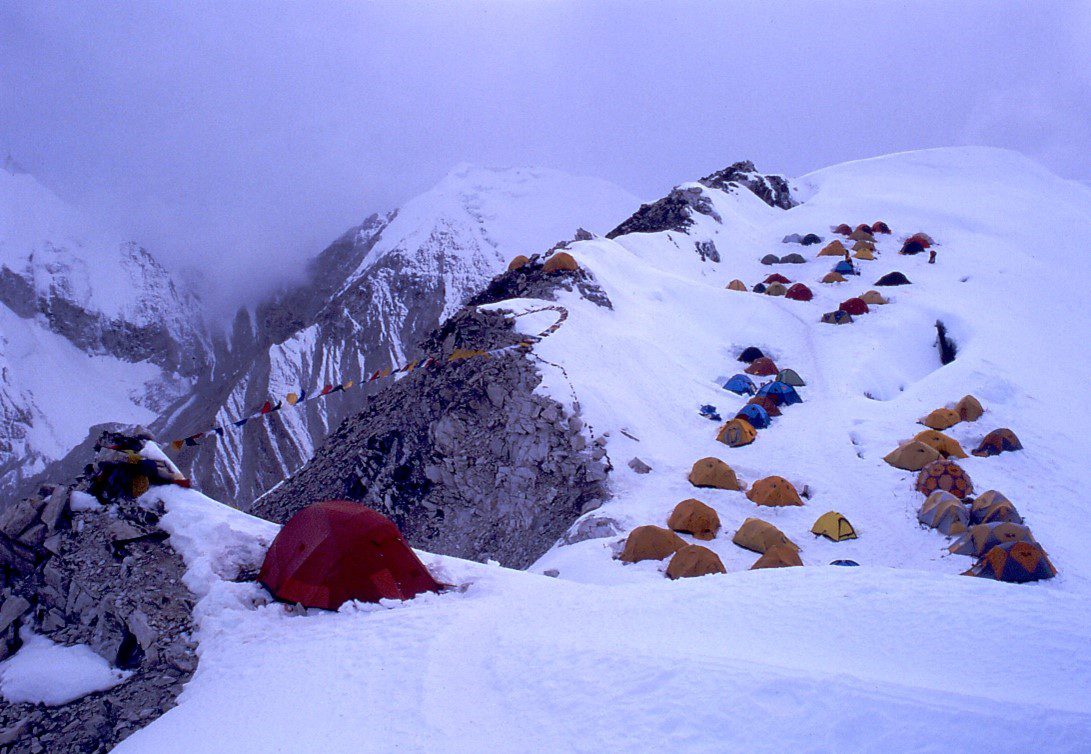 Cho Oyu has 5 main camps.  Base Camp 4,830m (in the valley for the first degree of acclimation).  Advanced Base Camp (ABC – 5,650m at the foot of the mountain proper).  Camp 1 at 6350m, Camp 2 at 7,100m, Camp 3 at 7,400m and the summit 8,201m.  Reaching each camp set it owns set of challenges.  For me it was microbial, malnutrition, dehydration, sleep deprivation and meteorological.  Vomiting and diarrhoea was most likely a legacy ailment from dining with yak herders down in the valley enroute to the mountain.  A combination of setbacks which makes great use of the two exits modern mountaineering tents entail.

Strong jet stream winds continued to lash the upper mountain preventing us from establishing Camp 3.   Wind, in addition to crevasses and avalanches make up the top three adversities the mountains like to deploy to the unwary.  Many climbers lost all their critical gear when Camp 1 was blown off the mountain during a storm causing several expeditions to go home.  An avalanche between camp 1 and 2 almost did the same.

Then there are the anomalies that make the diary but not the print.  The back of my throat got severely sunburnt when the high UV status reflected off the ice and into my mouth that was gaped wide open so to assist breathing.  Nostril hairs freeze into needles which pierce the skin, cracked lips and lobes, frost bite and plenty of toiletry mishaps that make up great dinner stories. 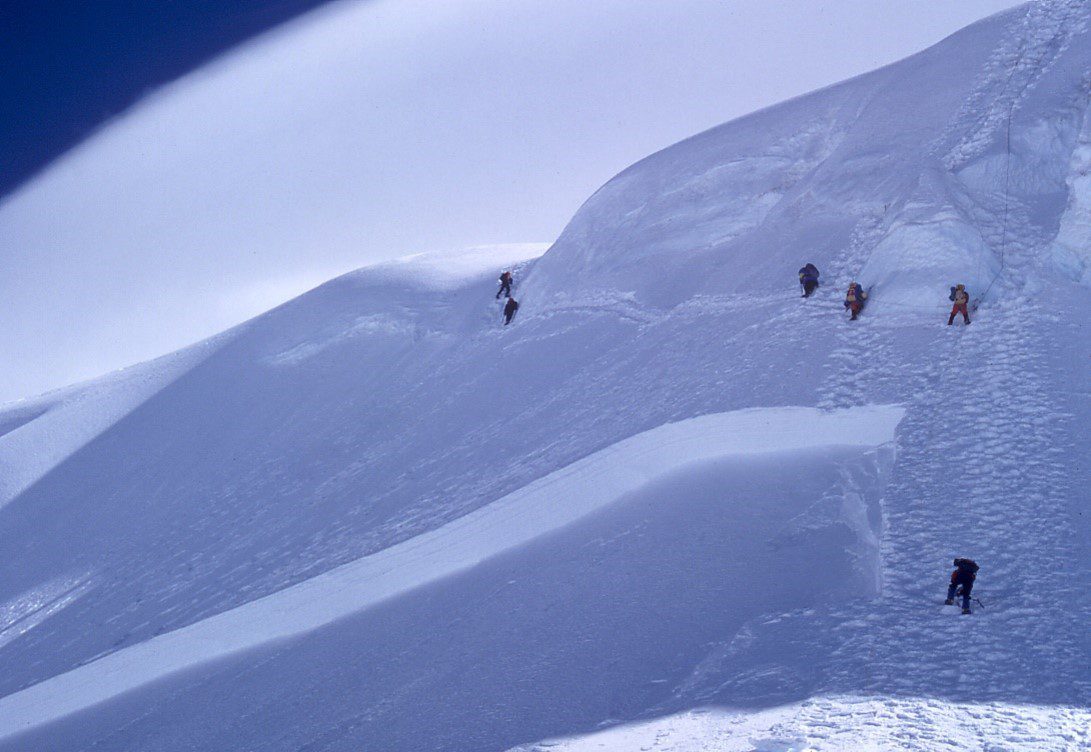 Between Camp 1 and Camp 2 traversing the ice cliff. You can see the large slab avalanche that gave way when we slept up at Camp 2

ABC sat on Tibetan side of the Nang Pa La pass, the unrecognisable boarder between Tibet and Nepal.  The Chinese maintain a scant but visible military base nearby to maintain order in a very remote, rugged and pioneering part of the state.

There is a lot of sitting around ABC waiting for acceptable weather windows to open up.  There are only so many games of Connect Four that can be played before reprieve from solace is sought.  Sometimes not how you would expect. 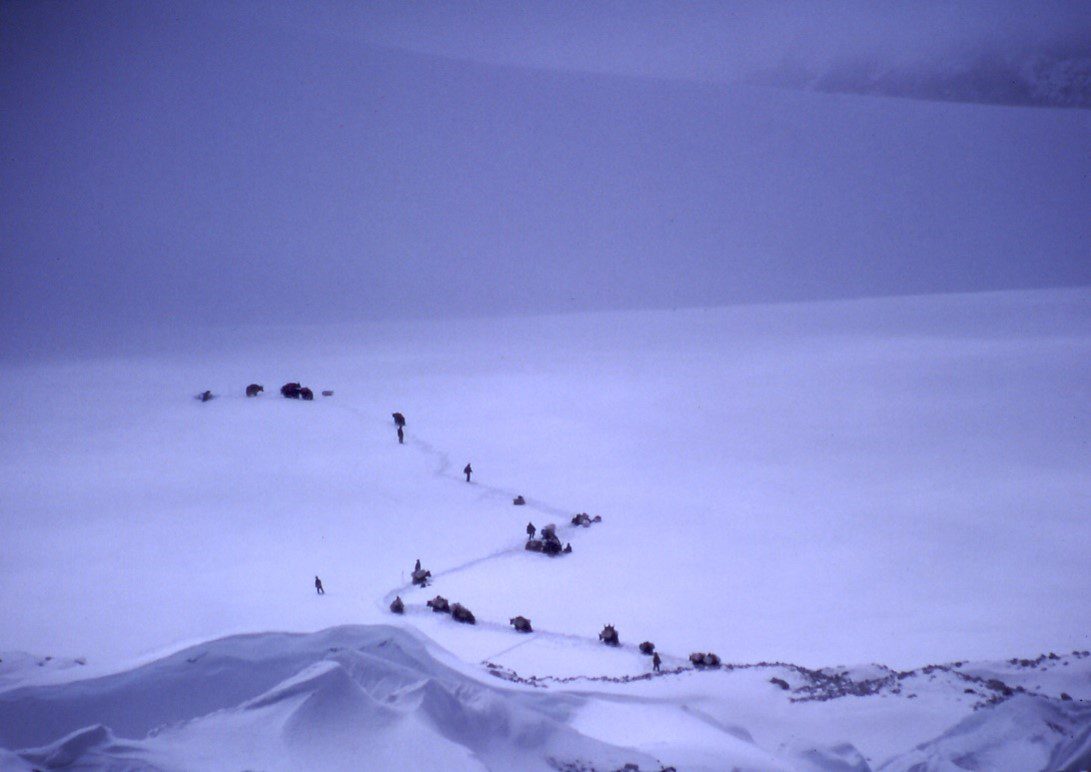 On Thursday 19th September a Tibetan woman lay unconscious within the realms of the pass and three residing Chinese soldiers came to inspect the status of the lady.  They were quickly ambushed by 40 hidden Tibetan rebels with an aggressive assault armed with rocks.  Two soldiers were hospitalised, and the Tibetan lady taken to jail.  The Chinese guns were stolen by the rebels who quickly fled over the pass into Nepal.

By Friday our mess tent became the official Chinese communication HQ and was filled with more Chinese soldiers waving their guns around in a very excited manner.  When the radio had exhausted its goodwill, about 28 soldiers took arms and pursued the rebels over the pass.  Obviously very little respect for international borders.  Only 27 came back.

Saturday saw high Cirrus clouds whipped over Cho Oyu like dragons in flight.  The mountain seemed to be on fire.  With climbing taken off the calendar our attention turned back to Connect Four.  When the Australians were about to take the winning blow, gunfire could be heard from our mess tent.  Racing outside we saw a lone figure collapse on the Nang Pa La pass.  We all assumed he was shot.  Our Sherpas cut across the crevasse ridden pass and carried the person back.  It was a lone soldier, the one that went missing.  He relived the tale of his encounter with the rebels.  It was amazing how quickly he perked up when he flamboyantly detailed how everybody kept shooting at each other until everyone ran out of bullets.  Well, almost all the bullets.  The re-enactment was worth of Broadway.  The story is not without an ending.   The rebels finally ran off deeper into Nepal to live a new life.  The soldier bought back some of the rifles and marked his triumphant return with his staged shooting on the pass. 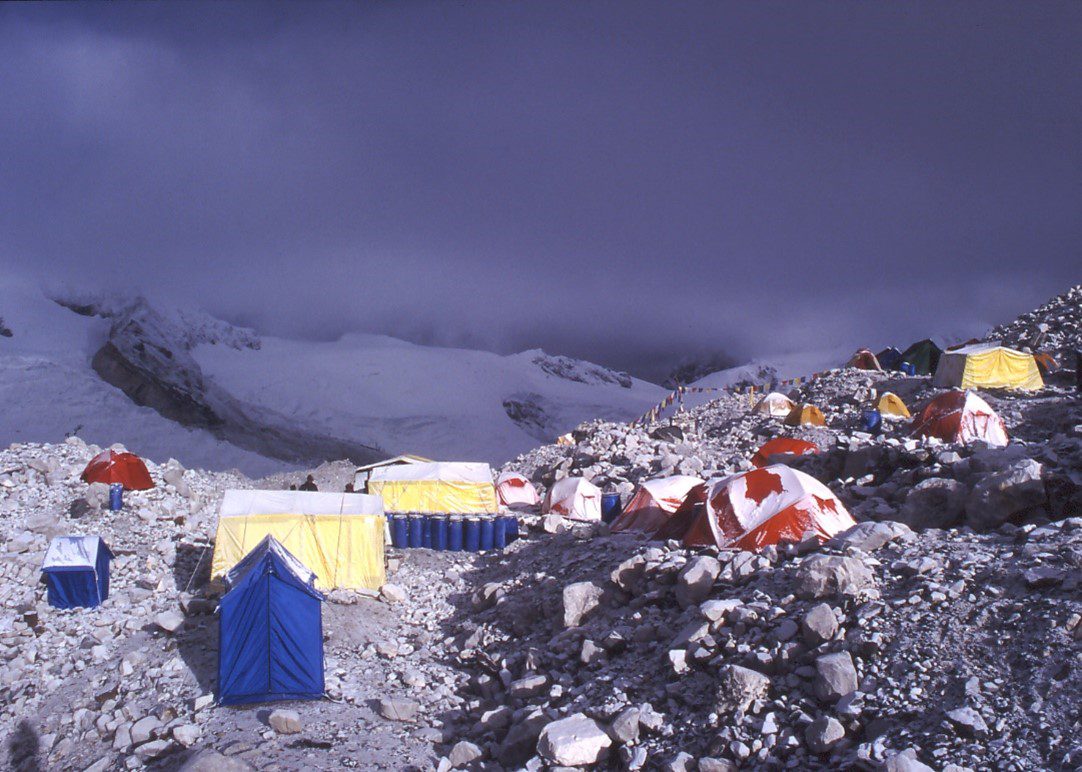 Not too much has been said about summit day yet.  After wiping the vomit from my blue down suit, I had hooked into the fixed line and slowly ascended the cliff known as the Yellow Band.  There was no turning back.  It was a 2.00am start but here the vagaries of time were lost.  Vision was narrowed to the placement of your boot and sound of ice breaking through your crampons was your only companion.  There was no adrenal sensation, no ecstatic elation.  The final hours atop of the mountain were emotionally void and honestly failed to connect you to the moment and honour its true appreciation.  This all comes later in reflection. 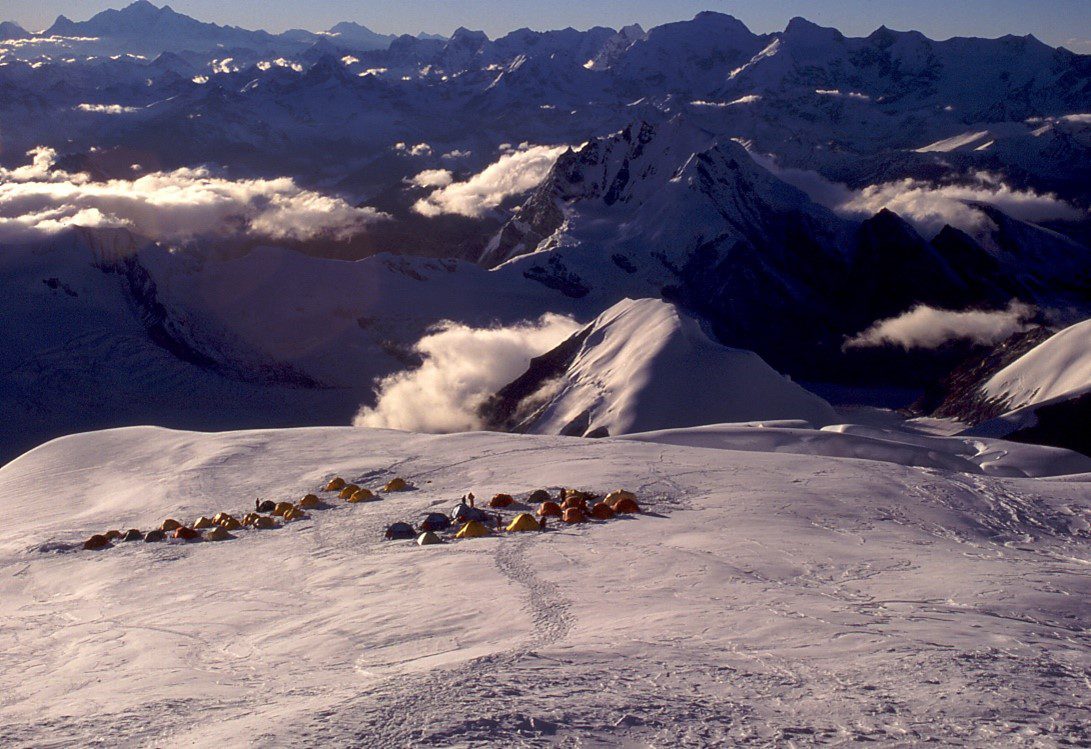 At 8,164m (47 meters short of the summit) my oxygen ran out.  From all literal accounts, the risk of a severe hypoxic reaction was very real.  With no assistance or access to any more oxygen, I was alone and literally kissing the death zone.  It was peacefully surreal.  Looking up into darkened sky gave a quietened solace that the stars were almost within reach.  Below the curvature of the earth extending beyond the greater Himalayas and the Tibetan Plateau dispelled a sense of earthly balance and assurance.  The comfort of lying back and closing the eyes for a long and desirable sleep was far more enticing than moving on.  But I had one more chapter and that was getting off the mountain. 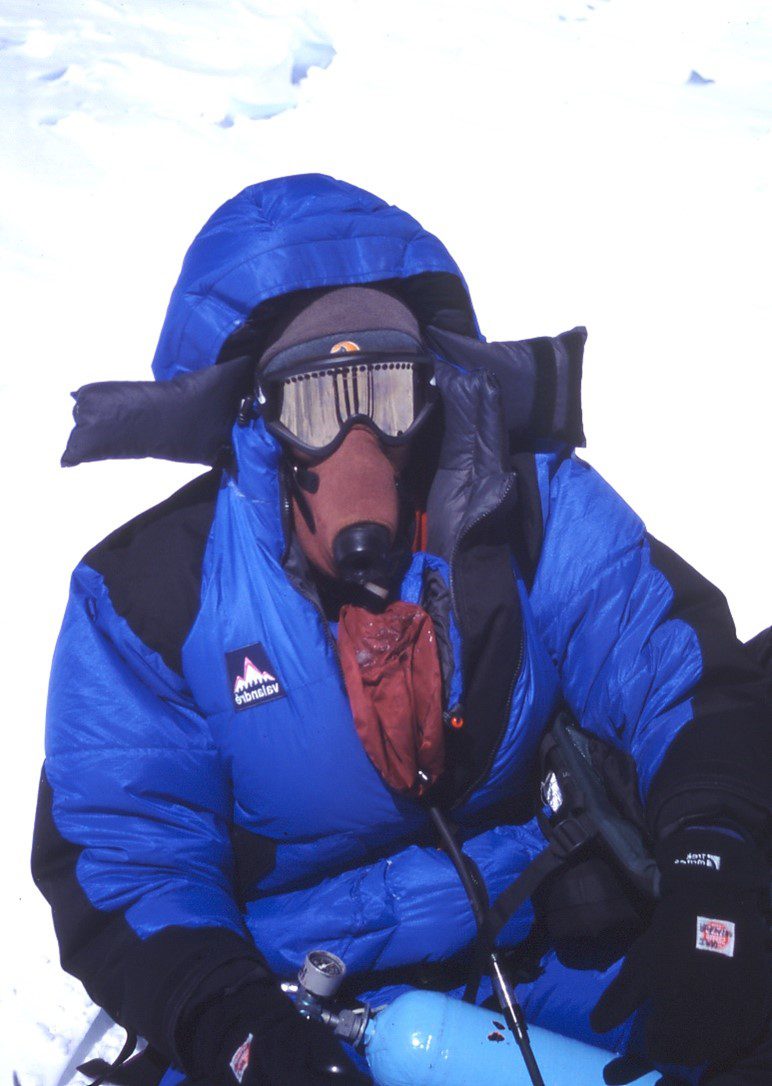 Out of oxygen at 8,164m. Notice the air bag deflated under my chin

Mother nature’s way of restabling order of authority in terms of a mountains’ eternal existence versus those who are delicately trespassing, underpins a humbled respect for the delicate balance we live between the two.  I met with Marco’s mother and girlfriend back in Kathmandu after the climb.  There was a sense of peaceful relief that their wait was over.  They always knew that Marco was going to keep pulling the tigers tail to conclude a short, intense, and exciting life.  They did not know when nor did he did not know any other way.