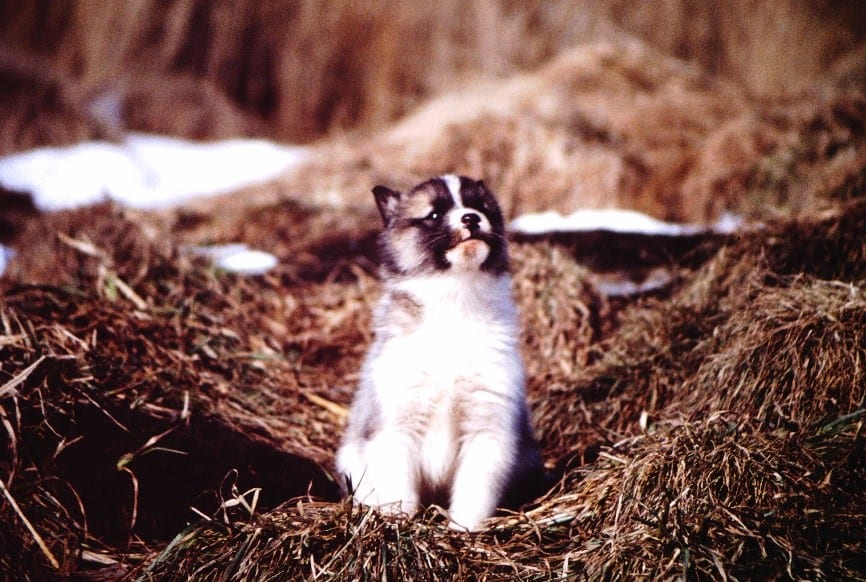 Posted at 18:18h in News, Off The Beaten Track by Alex Robinson 0 Comments
0 Likes
Share

With Deano and Mic back in Europe after our ice trek, I was now uninhibited at 66 degrees and 53 minutes north of equator in Sisimiut on Greenland’s west coast to throw unrestrained caution to life’s humilities and unexpected experiences, whatever that may entail.

Sod hut from the outside

I had found an abandoned sod hut, a traditional dwelling made of mud and rock.  It’s roof about four-foot-high half dug into the earth.  A tight narrow entrance led into a single room laden with old seal skins and candles.  Behind me the 200m face of a calving glacier feeding into a berg chocked fjord almost dwarfed the enormity of the wilderness, with the wind packed ice and snow foothills cradling the township before falling unforgivingly into the sea.  It became my home until I worked out my next move.

The Inuit language is difficult at best. The word “Nalunaarasuartaatilioqatigiiffissaarsualiornialikkerssaaieraluartunngooringaasiinngoog” has 85 letters and means “he tried to build a big antenna, but it was just a dream”.

So, my communication was limited to the locals expressing humbled pity on a homeless man who trekked out of the wilderness and sought refuge in a tent burdened by snow and ice. 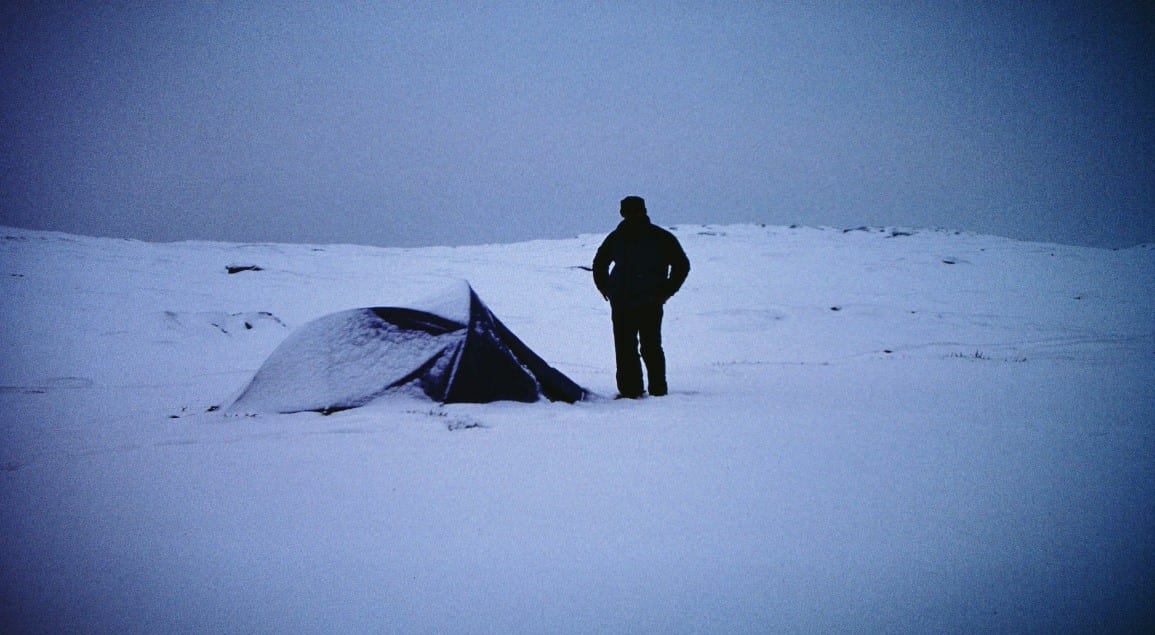 Ian with his tent outside an Inuit village

There are no swear words in Inuit language, no words for hate and intimate disdain.  Instead in the past they had settled feuds by gathering the community, dress up and in alternate actions would continue to mock each other in a series of gyration, drum beating and singing.  The person who had the community laughing the most would win.  The loser, with all respect shattered, had the choice to leave the village if desired.  These loners roaming the countryside are called Qivitoq.  Because surviving out in the harsh arctic wilderness by yourself would be near impossible, any that did were believed to have special powers and posses magic to do so.

Even to this day, the Inuit people are very superstitious of these ancient traditions as any unexplained noises or events that occur in the long dark winters are said to be the restless spirits of these Qivitoq.  It is the evil ones seeking revenge that they fear most. 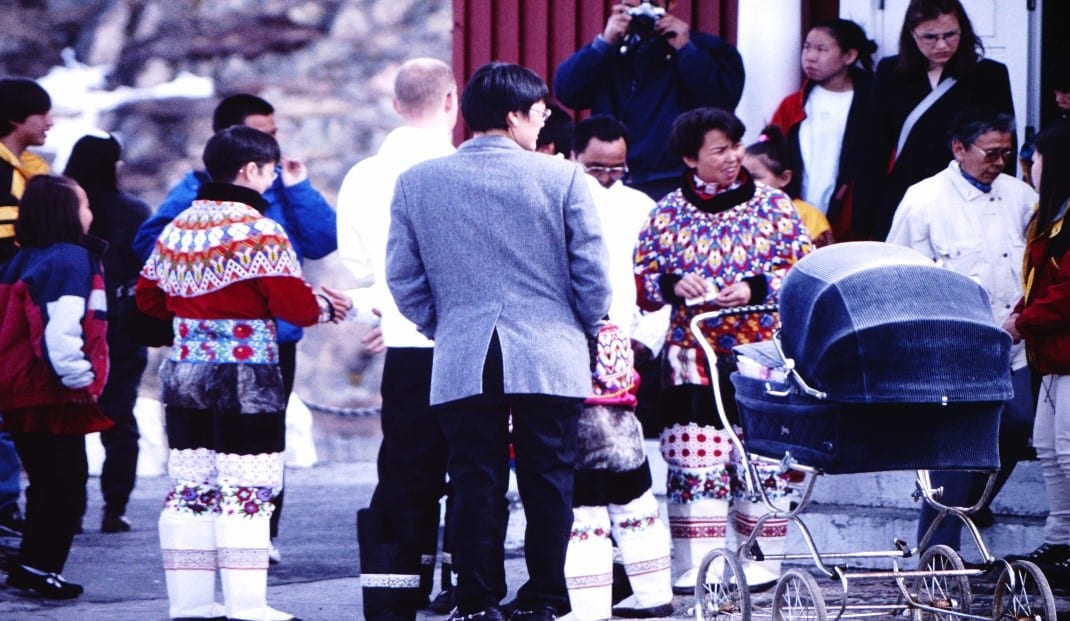 Dietary satisfaction funnelled into four main food groups; bird, fish, whale or seal.  There were seasonal variations to this as well – reindeer, musk ox, hares, arctic char, ammasalik and foxes.  I understand the sensitivities around these mammal groups.  You need to live there to understand that their subsistent lifestyle is not commercialised.  In its purest form they hunt what they consume.  It is their pilgrimage to learn arctic survival from a young age and need to be successful hunting on kayak with a spear before being allowed a rifle.  They are true custodians of their ecosystem, more than what could be said for western civilisation. 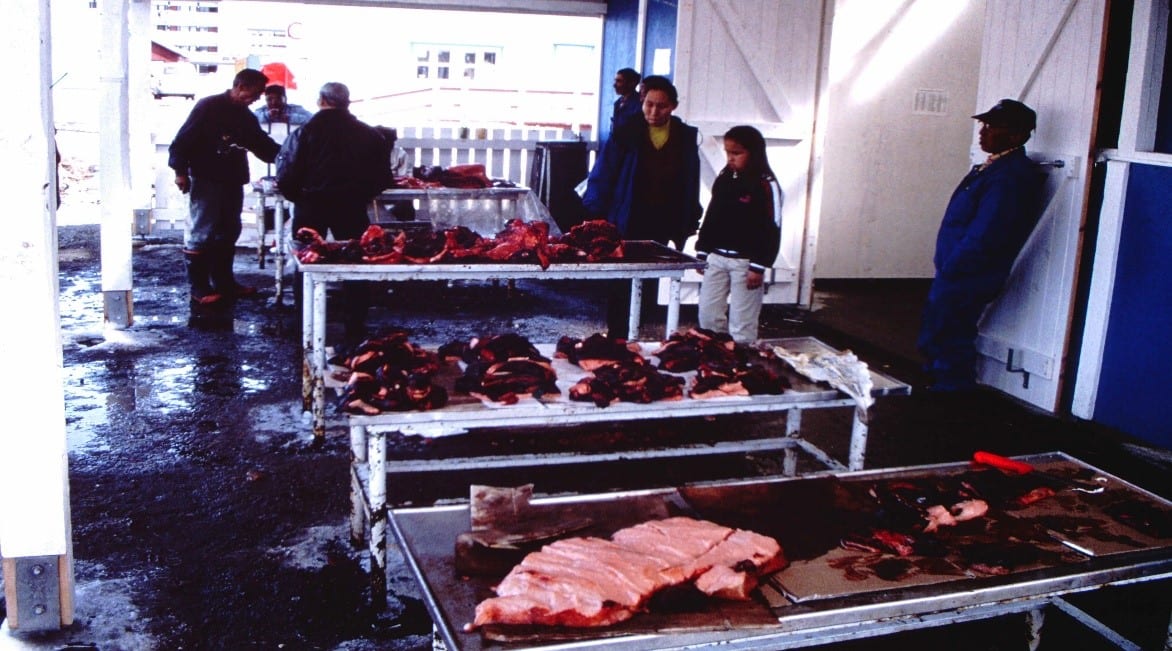 The dark meat of seal and whale blubber at Sisimiut

The cooking combinations of these food groups create a permutation matrix that can fill a calendar.  My early life as a rabbiter and jackaroo meant that I thought I knew how to prepare game.

Plucking the feathers of an Auk, gutting and prepping seemed to be universal I thought around the world.  But not where food and nutrition are a rare commodity.  I was ostracised by the local family for throwing out the gizzards, which were quickly retrieved and put back on the menu.  Seal creates a strong garnished odour that seeps into the very pores of your skin, whilst whale with an inch of blubber is a delicacy.  Fried, boiled, smoked, dried and raw.  I had it all and it was all good.

Greenland is the size of Europe, but it has no road or rail network.  Transport was either by dogs or ferry when the ice permitted.  There lies the first challenge.

I jumped the coastal ferry from village to village down the west coast.  Success was measured on arrival, not time.  An opportune whale kill nearby would signal the vessel motionless within the ocean and with the barge doors open, Inuit’s would sail large chunks of meat and blubber and sell them to the vessel to feed its occupants.  Whale burgers were a big hit on the west coast run. 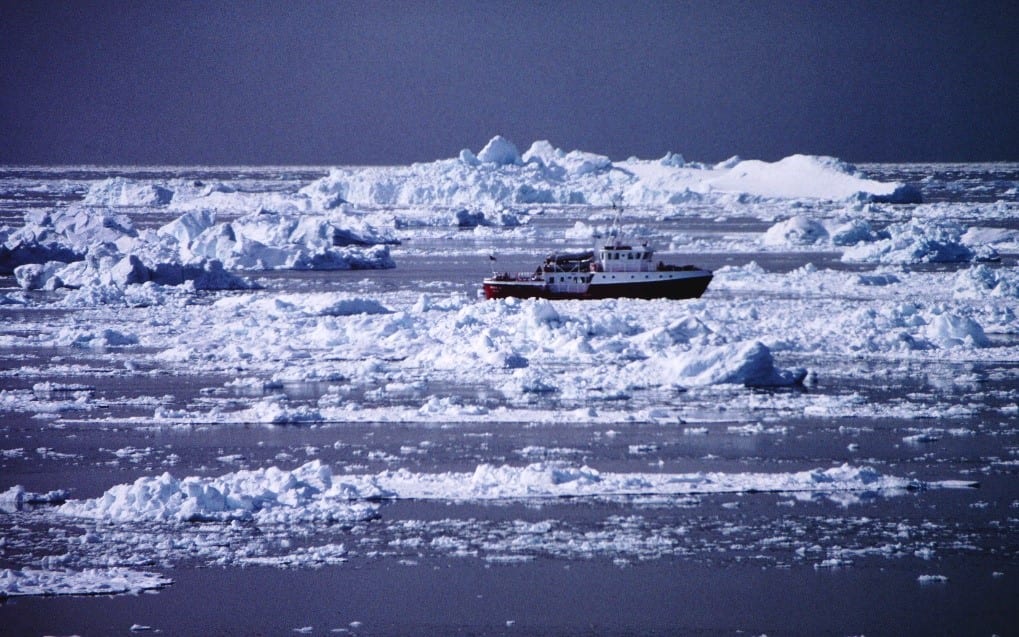 When the wind changed direction and the ice packed around the twin hulled vessel, time was lost ramming the ice in a race to secure harbour.  Too many stories of Shackleton and local misfortunes become front and centre of mind when the ice packs in.

Each village consisted of randomly positioned Danish styled dwelling that seemingly clung on to a rocky face abreast the shoreline, as if in their final clutch before the glaciers would push them into the darkened ocean.  Their multi-coloured cladding provided much vibrant contrast to the monotones of glaciated ice and mountainous rock.

Usually the entrance to the village would be archways of whale ribs, antlers or other subsistence offerings.  Most of Greenland is either under sheet ice or mountainous.  Real estate plots are rare to find.  Burial plots even harder.

The locals were incredibly convivial with their hospitality shared by strong communal beliefs and backed by instinctual survival.  My arrival in a village would always cause great stir.  No more than one night was ever spent in a tent on the outskirts of a town before a line up of options to live with a local family.  Birthe Kleist, Hanseeraq, Haldora, Anori, Mette, Alliaq, Nuka, Dorthe, Paarnanngoaq, Jonna to name a few.

It was difficult to find a spot for a tent.  The village naturally took all the prime spots.  Then there was the moat of huskies.  For every family there were 5- 10 dogs.  This amounts to a hundreds of canines circumnavigating the township.  Beyond these perimeters lay the wilderness where my little purple two-man tent lay anchored.  It was never quiet as you would expect.  Up on a lonely rocky perch or on the foreshore listening to the howling of dogs, the wind would vortex over the snowy crags and the ice forever grinding towards reprieve on lower ground. 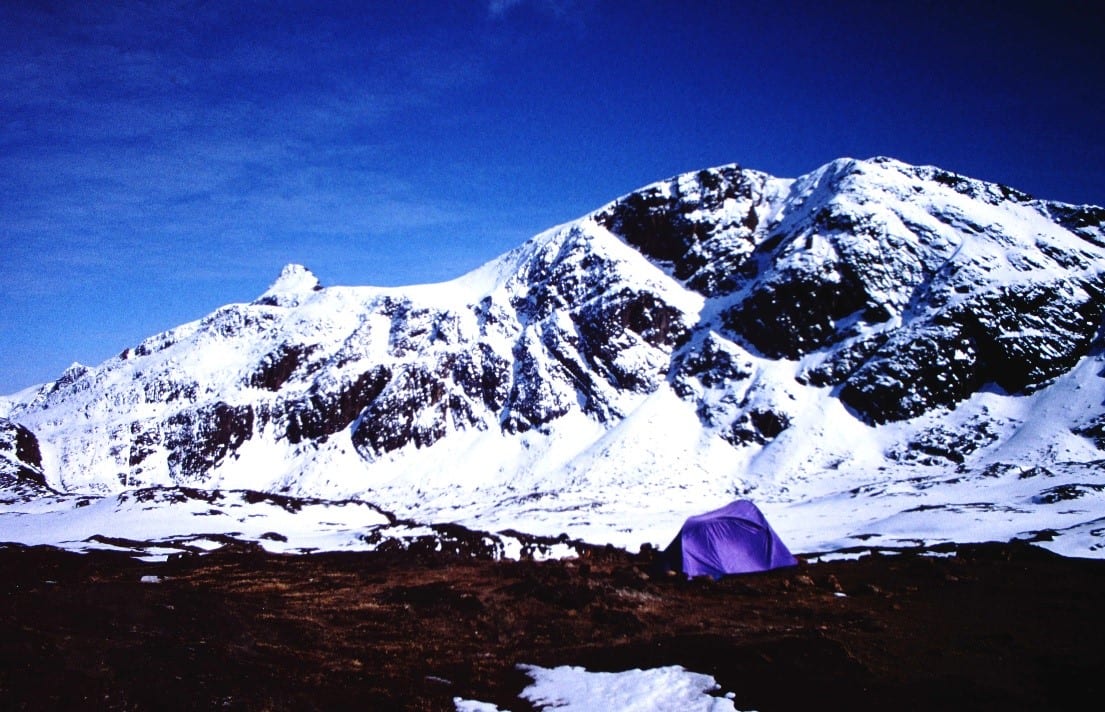 The wildlife was abundant as the environment was raw.  The locals always knew when and how to find them.  I would always try and find a place to camp that overlooked the water trying to spot the whales everyone else has been spotting.  I guess I had to go no further than the local market to find out where they all went. 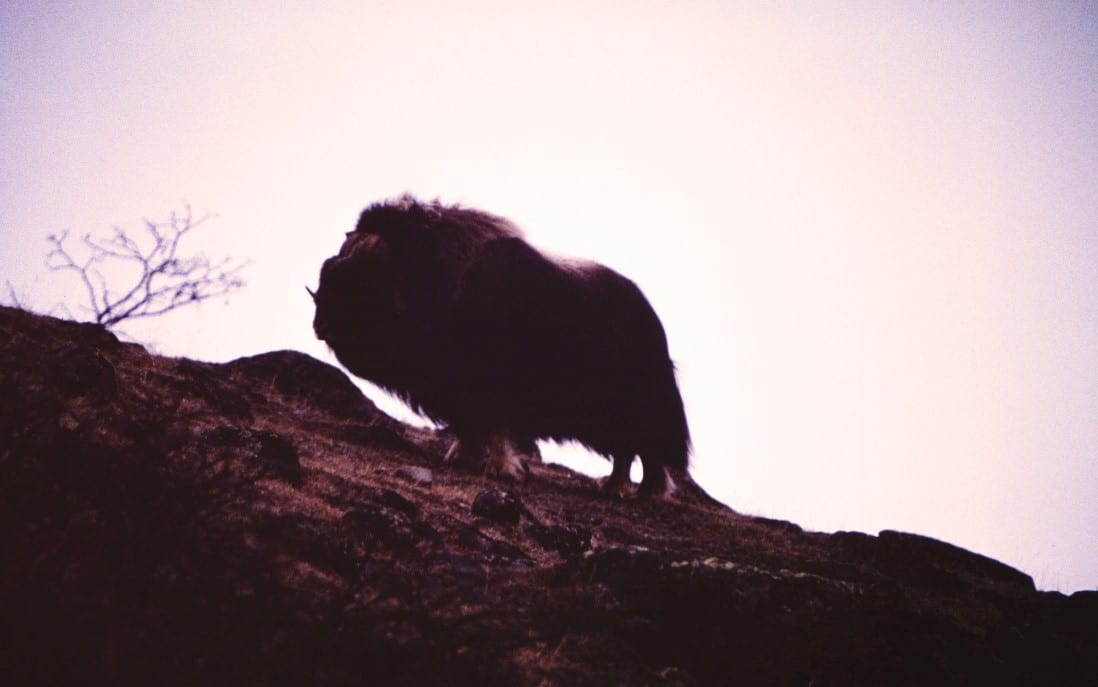 It was only when I engaged one that spoke English, a higher imperative came into play.  On top of the floating ice pack down the coastline, rode the polar bears for annual feeding pilgrimage.  My little flapping tent on the foreshores was nothing more than a serviette for their entrée before seal and fish filled the bellies of these incredible carnivores.  No one ever understood why I did not posses a gun.  Nor did I in hindsight.

Death is common in harsh environments.  It was explained to me by Mette that everyone in Greenland has a candle of different width and height.  Some burn for a minute, some for 100 years. You have no control over when your candle burns out.  But you can make it more efficient by giving other people light, warmth and guidance from your candle.

Aliga lost her father when she was 7 years old who broke through the sea ice while hunting.  She had also lost another friend this way when she was fishing with him out on the sea ice.  These stories kept repeating themselves as I met more and more families touched with tragedy spurred from such an unforgiving environment.

If it wasn’t the ferry, then it was hiring a team of dogs to get from A to B.  Unlike the Alaskan huskies that ran in two lines, Greenland huskies spanned out like a fan.  The leader at the front and centre setting the pace and each subsequent dog had its contribution and place in the social order.

Getting down a mountain the order was reversed.  You picked your line, pointed the sled directly down nose first and the dogs fanned behind.  The dogs became the parachute to anchor the speed as the sled would only go as fast as 12 dogs dragging behind.  Do not be fooled.  Gravity is a universal force that can bend space and time and far exceeds the will power of small pack of dogs.  Once committed to the run there was not stopping until you were at the bottom.  I can verify that sleds weighing in excess of 200kg can get good (unintentional) airtime, and the dogs seeking the adrenaline they were born for loved every moment of it. 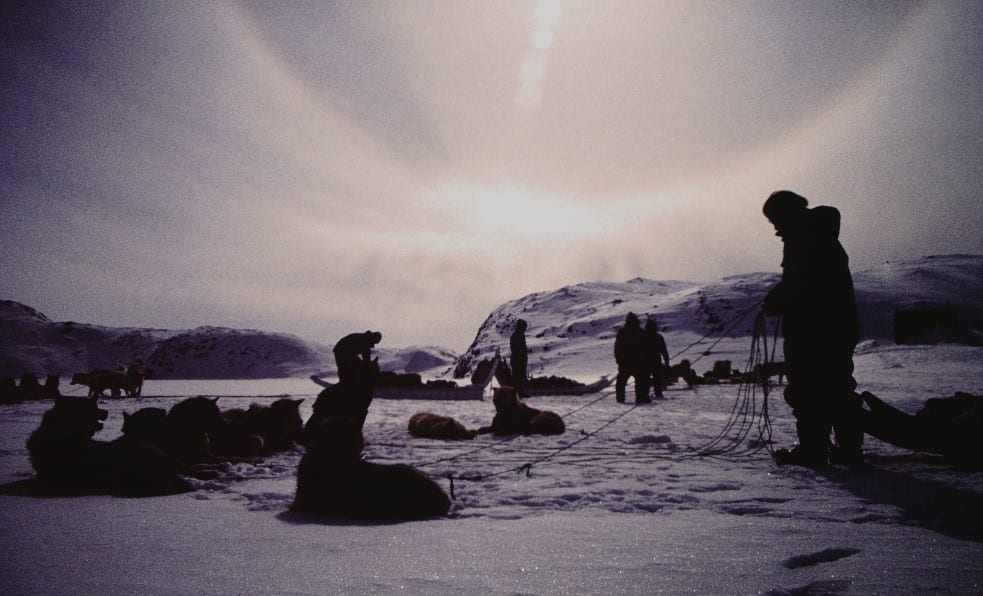 One of Ian’s dog team under the Midnight Sun

Dog teams do not run on highways.  They navigate back country on a need to go to basis, so the terrain is unpredictable and varied.  On one of our journeys to the inland ice we ran into a hidden crevasse.  The driver and I bailed before going down the slot.  Some dogs made it over. Some didn’t.  It took the rest of that day to extract and account for every dog and to repack the sled.

We sat on seal meat to fuel the dogs for long journeys and they went all day.  They were incredibly loyal, talented and obedient.  But they were not pets.  There was no face licking and frolicking in the snow with them like a Hollywood drama set in the Alaskan range.

My journey down the west coast continued from Sisimiut, Manittsoq, Nuuk, Qassimiut, Narsaq, Qaqortoq, Aasiaat down to the southern tip at Nonortalik.  It was a multidimensional journey.  The trekking, kayaking, hunting, rescue missions, ancient burial grounds, climbing, culinary explosions and wildlife all located on one of the most astounding geological wonders of the world.  But it was the local indigenous people that stood on the apex of experience.  As it always is.